Woodworm is the commonly used term for a number of wood boring insects which lay their eggs on or in timber and whose larvae bore through the wood leaving a network of tunnels, damaging and weakening the structure.

Woodworm attack is varied - both in the type of timber which different species infest and their larval life-span which can range from ten months to 11 years. This means that accurate identification by the surveyor is the first essential step because not all infestations need treatment. Depending on the wood boring insect involved, the timber treatment would consist of the application of an appropriate professional product. For Common Furniture Beetle (Anobium punctatum) we treat using a professional micro-emulsion insecticidal formulation which is applied by a pressure sprayer or brush. It has only a minor odour and the area is safe to re-enter in 1 - 2 hours after treatment. The treatment of Death Watch Beetle (Xestobium rufovillosum)requires a more rigorous approach, and we use a dual purpose gel that combines Boron with Permethrin which allows a much deeper penetration of the infested timbers.

The 5 main woodworm species are:-

Common Furniture Beetle  (Anobium punctatum)
This beetle is largely responsible for about 75% of damage to     property and attacks the sapwood of softwood and European hardwoods. The attack is most severe in damp and fast grown timbers. The tunnels tend to run with the grain of the wood and the insect exit holes are round and approximately 1.5mm - 2mm in diameter.

House Longhorn Beetle (Hylotrupes bajulus)
The largest and most damaging but restricted mainly to the southern Home Counties.

Powder Post Beetle (Lyctus brunneus)
This insect attacks the sapwood of wide pored hardwoods such as oak provided the sapwood has sufficient starch content (greater than 3%). Powder Post Beetle is a very specialised insect and has very specific requirements, especially in relation to starch. It is the starch content of potentially susceptible hardwoods which make them prone to attack. It should also be noted that as the wood ages the starch content declines due to bacterial action, etc, therefore after around 10-15 years starch levels drop so that infestation/activity is no longer possible. The sapwood is often entirely disintegrated leaving only a very fine flour-like dust (frass). Where tunnelling exists it tends to run parrallel with the grain.
Emergence holes are about 1-1.5 mm in diameter, and like the damage, restricted to the sapwood. 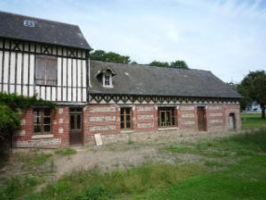 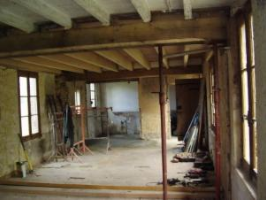 In October 2010 we undertook a treatment involving several types of wood boring insect within this charming French property in Normandy. The building dates from 1731 and contained an infestation of Death Watch Beetle (Xestobium rufovillosum) and Common Furniture Beetle (Anobium punctatum). The French builders had also inadvertently introduced Powder Post Beetle (Lyctus brunneus) to the property during the renovations. It is essential that the correct wood treatment is applied to treat the particular wood boring insect species present. The correct identification of the species causing the problem is vitally important and is best undertaken by someone qualified in treating timber pest infestations. 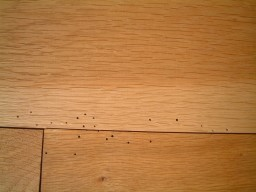 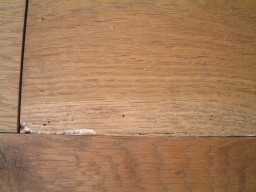 Above are a couple of pictures showing the damage caused by and the unusual distribution pattern of the Powder Post Beetle (Lyctus brunneus). Sadly this type of infestation is becoming more common in the UK due to hardwoods being sourced from European locations where the Powder Post Beetle is more widespread. This flooring was within an external office in West Dorset. 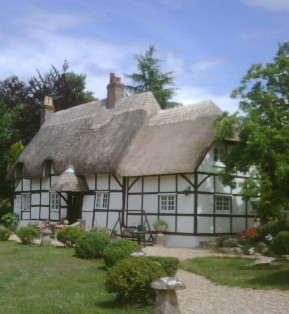 Above is a picture of a beautiful 'chocolate box' cottage in the New Forest which we recently treated for the presence of Death Watch Beetle. The cottage required the treatment of both internal and external timbers and even timbers within a cellar below. However, not all of the cottage required treatment as surprisingly part of it is a new build (it merges with the original house very well) and in this area softwoods had been used in the construction.

Correct diagnosis of the beetle involved and the appropriate treatment required highlights the need to use a suitably qualified timber treatment technician. Proactive Pest Prevention Ltd are qualified in the identification and treatment methods of all wood boring insects.